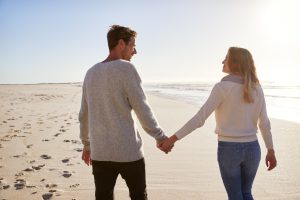 Besides sharks and big waves, unmarried couples can be vulnerable in other ways, and don’t have the benefit of statutes that protect married couples.

If you live with your significant other or are in a domestic partnership, and whether you are in a same-sex or opposite-sex relationship, couples oftentimes share rent or mortgage payments, contribute financially in other ways to a common household, have children, make joint purchases, and intertwine their lives in many other ways.   You can think of these topics as areas of possible exposure, also known as “life.”

Eventually, people part ways whether it is through a break-up or the eventual passing away of a partner.

Although things have certainly evolved from our colonial past when living together (and sexual relations between unmarried adults) was a serious offense, seven states still had statutes prohibiting cohabitation on the books as recently as 2009, including Massachusetts, although all most likely unenforceable.

The 1998 Massachusetts case of Wilcox v. Trautz, 427 Mass. 326 concluded that unmarried cohabitants may contract concerning property, financial, and other matters relevant to their relationship, and that such agreement is valid even if expressly made in contemplation of a common living arrangement, except that sexual services cannot constitute the dominant consideration for the agreement.

Thus, this case confirmed that a contract between two adult unmarried cohabitants was valid and enforceable in Massachusetts. The evidence demonstrated that the principal purpose of the agreement was to clarify the parties’ rights with respect to dividing assets acquired during their relationship in the event that they should separate. The agreement was otherwise in compliance with the rules of contract law.

The most important take away is that without a written agreement, in most ways the law still treats unmarried people – even those in long-term committed relationships – as strangers when it comes to legal issues.  Thus, having a domestic partnership or cohabitation agreement is a good idea.   Making sure your basic estate planning documents are completed and updated is another smart move.

At Next Phase Legal, we help unmarried couples and partners in several ways, including:

For more information about living together, joint ownership agreements, and resolving issues related to uncoupling or transitioning out of unmarried relationship, contact us today.