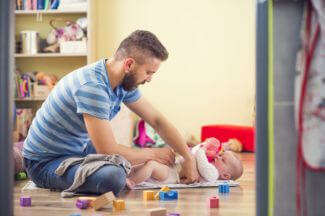 Dear Jon Snow: No judgment here. There are plenty of “Snow” children in our current age. (For those of you who don’t watch “Game of Thrones”, characters born out of wedlock in the show have the surname “Snow” instead of a parent’s last name. Also, check out HBO and thank me later).

Parenthood always comes with some kind of uncertainty, ranging anywhere from which stroller to purchase to how to raise your children. For unmarried parents, there are additional uncertainties that may present themselves. Below is a general overview of some of the most common issues that unmarried parents face.

How to Prove Paternity

There are two methods to establish that a man is the father of a child born out of wedlock:

Paternity in Massachusetts can be established (meaning a man is legally declared the father of a child) outside of the court process if the parents are in agreement about who is the child’s father. This can be done if both parents sign a Voluntary Acknowledgment of Parentage form at the time of the child’s birth.

Hospitals now provide unmarried parents the opportunity to sign this form when the child is born so that the father can be listed on the child’s birth certificate. Parents may also choose to sign the form later at the city clerk’s office in the city where the child was born. If both parents sign the form at the hospital or at the city clerk’s office, the Registry of Vital Statistics lists the father on the child’s birth certificate.

On March 31, 1998, the law was changed to provide that a parent has only sixty days to rescind/cancel an acknowledgment of paternity made out of court if it was made on or after March 31, 1998. In order to rescind the acknowledgment, the mother or father must file a court case in the Probate and Family Court for the county where the child resides.

Once a complaint to rescind acknowledgment is filed, the court must order a genetic marker testing and the initial acknowledgment is a sufficient basis for admitting the results of the genetic marker tests into evidence. Any legal responsibilities of a parent, such as paying child support according to a support agreement, will not be suspended during the challenge unless the court orders it for good cause shown.

Once the 60-day period has passed, it is fairly difficult to set aside an acknowledgment of paternity and the court will view the form as the equivalent of a final judgment of the court even though it was signed outside of court. The acknowledgment will then have the effect of a judgment subject to challenge within one year for the following reasons:

It is worthy to note that courts find a compelling public interest in the finality of paternity judgments, meaning that what is in a child’s best interest will often weigh more heavily than the presence or lack of a genetic link between the parent and the child. Therefore, time is of the essence in a paternity case so it is best to consult a qualified family law attorney as soon as you discover any reason why the acknowledgment or a court judgment should be set aside.

If the parents are not in agreement about who is the father of the child, another way to establish paternity is to file a paternity case at the Probate and Family Court. The court can legally declare that a man is the father and then order that the father’s name be added to the child’s birth certificate.

If you are trying to prove paternity in a contested paternity case in court, you should be prepared to offer testimony about sexual intercourse with the other party during the probable period of when the child was conceived. Testimony about the mother having sex with unknown men at any time or sex with other men at any time other than the probable period of the child’s conception will not be allowed unless the mother offers the testimony herself.

A mother’s testimony of having sex with an alleged father during the probable time of conception is sometimes enough to establish paternity by clear and convincing evidence by itself, but it is advisable to request genetic marker testing to ensure that any doubts are more likely resolved. An alleged father could also request genetic marker testing to try to prove that he is not the father.

An alleged father will have to overcome presumptions that he is indeed the father of the child at trial in the following circumstances:

Generally, a parent trying to prove paternity through a paternity trial should ask the court to accept certain trial exhibits and make arrangements to get the genetic marker testing reports. Other documents and/or witnesses may also be relevant in establishing paternity. A qualified family law attorney will be able to guide you through this process and will know what trial exhibits to submit, how to subpoena genetic market testing reports if necessary, and what other documents or witnesses may be relevant to your situation.

What if the Mother is Married to Someone Else?

If the mother was married to another man when she became pregnant or the child was born within 300 days of her divorce, the husband (or former husband) will be presumed to be the father of the child and will be listed as the father on the child’s birth certificate.

If the parents want to have the biological father listed on the birth certificate, they must get the notarized signature of the mother’s husband on an Affidavit of Nonpaternity form or a court order declaring that the husband is not the father. The parents must also sign the Voluntary Acknowledgment of Parentage form discussed above.

Legal Rights and Responsibilities Associated with Establishing Paternity in Massachusetts

Before establishing or seeking to establish paternity, you should consider the legal rights and responsibilities that come with establishing paternity. Once a man is legally declared as the father (voluntarily or by court order), he has a legal obligation to support his child and can be ordered by the court to pay child support. The father will then have the right to seek court orders for custody and/or visitation of the child.

You should also consider the benefits to your child by establishing paternity. Once paternity is established, your child will be in a better position to receive an inheritance from the father, to obtain Social Security benefits should the father pass away, and for tracking the father’s medical history should the need arise.

Other Things to Consider

There are many other issues to consider related to paternity, such as:

One of our family law attorneys can help you determine what the best steps are for your particular situation and can provide you with other assistance, whether you need representation in court, or just some help completing forms. Since time can be crucial in these cases, it is worthwhile to consult a family law attorney as soon as find yourself in a situation involving paternity.