So you feel as though you’ve made progress in your divorce by getting a child support order, alimony order, or parenting schedule from the court…but then your ex-spouse refuses to pay and/or comply with the parenting schedule.  What do you do now?  What are your options?

Or, let’s switch roles.  What do you do if you’re the spouse that is required to pay, but you’ve found yourself in a situation where you are no longer financially able to comply with the order?  What do you do now?

Looks like you should brush up on your knowledge about contempt actions. Contempt cases can have serious repercussions, so we do suggest that you contact a family law attorney or divorce lawyer experienced with such matters.

There are two types of contempt cases:  a civil contempt and a criminal contempt.  This allows the Massachusetts Probate and Family Courts to both enforce orders, sentences, judgments, decrees, and/or to punish the failure to obey such orders, sentences, judgments, decrees.  If a court determines that an obligor (person required to pay or otherwise perform) has sufficient assets to satisfy his/her support obligations or has voluntarily left employment or stripped himself of assets, it may find the obligor in contempt.

Additionally, the Plaintiff initiating the Complaint for Contempt must show the following:

In a civil contempt, the burden of proof is on the defendant to show that he is unable to comply with the order.

A criminal contempt works as a punitive tool to punish the disobedient party, and may include jail time.  In a criminal contempt action for a nonsupport case, there must be a finding that the obligor had the ability to pay support when it was due and knowingly and intentionally failed to obey the order.  The defendant has a presumption of innocence and must be proven guilty beyond a reasonable doubt.  This is different from a civil contempt action where there is already a premise that the obligor had a present ability to pay the arrearages at the time of the contempt proceeding and the defendant may be found guilty by a preponderance of the evidence.

If the court intends to impose a sentence of six months or more of imprisonment as a punishment, then the defendant will be entitled to a jury trial as a matter of federal constitutional law.  It is important to note that even in a civil contempt action, the defendant may be sentenced to jail.  However, since the defendant in a civil contempt action may purge himself of the contempt by complying with the order, he is not entitled to a jury trial.  A judge may also order that a jail sentence be served during such hours that will allow the defendant to continue his employment, so that he has an opportunity to provide the support to the persons entitled to receive it.

If you are in a situation where you are the obligor and now find yourself financially unable to comply with a support order, your best option is to file a Complaint for Modification.  (Or, you know, change your identity and flee to a country with no extradition…..just kidding, that would be wrong!  Not that I haven’t considered it to escape student loans…).  For alimony orders, a complaint for modification requires a showing of a substantial change in circumstances, either in the economic needs of the recipient or the ability of the obligor to pay, or both.  For child support orders, a complaint for modification requires a finding of a material and substantial change in circumstances, and the modification must conform to the Child Support Guidelines and be in the best interests of the child.  A court may modify its prior alimony orders both retroactively and prospectively, but a court’s power to modify a child support order retroactively is limited to the date of the filing of the modification complaint.

But what if my ex-spouse and I have made our own personal agreement on a lesser amount of support?  Why should I bother getting an attorney involved?

A word of caution to those that find themselves in this type of situation:  a private agreement between two parties for a lesser amount of support than that provided by the court will not bar a civil contempt action to collect arrearage even if the obligor can assert that he relied on the personal agreement to pay less than the court had ordered.  If you and your ex-spouse are truly agreeable to a lesser amount of support than the court has ordered, then the better and more prudent option would be to file a modification with the court.  Sure beats getting a surprise summons if your ex-spouse suddenly changes his/her mind and decides they want the full amount of support and the arrearages!  Plus, a monetary contempt judgment shall carry interest with it, from the date of the filing of the complaint.

So as long as I keep paying, I’m safe?

Failing to pay a support order is not the only way to find yourself in a contempt action.  A party may also be held in contempt for refusing to comply with judgments relating to an assignment of property incident to or after a divorce (such as delivering documents or executing the conveyance of land).  In such situations, a judge may order that the act be performed by another party at the cost of the disobedient party, and may find the disobedient party in contempt.

Failing to obey judgments regarding the custody of the children is another way you can find yourself in contempt.  Too many times, we see a parent refuse to comply with the parenting schedule ordered by the court and deny the other parent’s parenting time with the child as a personal form of punishment for a missed or late payment, and so forth.  Not only does this ultimately hurt the child who is being denied time with one of his parents, but it also gives way for a contempt action against the denying parent.  The court is also authorized to appoint a guardian ad litem to commence contempt proceedings for failure to obey judgments of the probate court involving the care, custody, or maintenance of minor children.  To avoid this, it would be better to continue to obey the judgments regarding the custody of the child, regardless of whether the other parent has been obeying the support order, and to file a Complaint for Contempt.

In order to commence a contempt action in Massachusetts, you or your attorney must file a complaint for contempt with the register of probate at the division of the Probate and Family court that has jurisdiction (generally this would be the same court that issued the order).  Once you receive the summons from the court, both the complaint for contempt and the summons must be served on the defendant either by delivery to him personally or by leaving the copy of the summons and complaint at his last and usual place of abode and by mailing copies to him.   If service is made by the latter method, then the notice must be proved by an affidavit containing a particular statement of how the service is made.  It is important to be mindful of making proper service, because a failure to do so may result in your action being dismissed by the court.

If a party is properly summonsed for contempt and fails to appear, the court may order a capias (a write ordering the arrest of a named person).  Upon a hearing for the contempt action, a judge may order the defendant to make a payment of all arrearages outstanding on the date of the hearing and may impose orders for failure to make such payments, such as a jail sentence.

In a contempt action, there is a presumption that the plaintiff is entitled to receive all of his reasonable attorney’s fees and expenses relating to the attempted resolution, initiation, and prosecution of the complaint for contempt, in addition to the judgment of monetary arrears.  This presumption of an entitlement to attorney’s fees can only be overcome by specific findings that support a reduction in a request for reasonable fees.

What if my ex-spouse no longer resides in Massachusetts?

Thanks to the Massachusetts Long Arm Statute, the courts may have the power to oversee the modification and enforcement of the orders they issued.  If a court had jurisdiction of the parties in a marital proceeding and issued a valid child support order, then the departure of one of the original parties from the Commonwealth will not divest the court of its jurisdiction, so long as the plaintiff and the child still reside in the Commonwealth.  However, if you are seeking enforcement of a child support order for past-due support against a non-resident after the child has reached the age of majority, it would be wise to bring the action sooner rather than later.  The courts will consider whether the filing was within a reasonable period of time-based on the circumstances of the particular case.  Basically, don’t wait eight years after your child has reached the age of majority to file a complaint against a non-resident.

I got summonsed with a complaint for contempt, am I going to jail?

Not necessarily, but if anyone tells you to bring your toothbrush to court, then that is not a good sign.  This is where you take the wheel and decide which direction you are heading in.  If you pay the arrears in full prior to the scheduled hearing on civil contempt, then you may seek to have the contempt complaint dismissed.  In order to properly answer a complaint for contempt, we definitely recommend that you call an attorney.  Your attorney will be able to tailor the answer based on the circumstances of your particular situation and may be able to get the action dismissed.

Sarah Yun is an associate attorney at Next Phase Legal LLC in Norfolk, MA, where she works with divorce and family law clients. Please call (508) 359-4043 for more information or to schedule a consultation.

See the chart below for procedural differences between Civil and Criminal Contempt Cases: 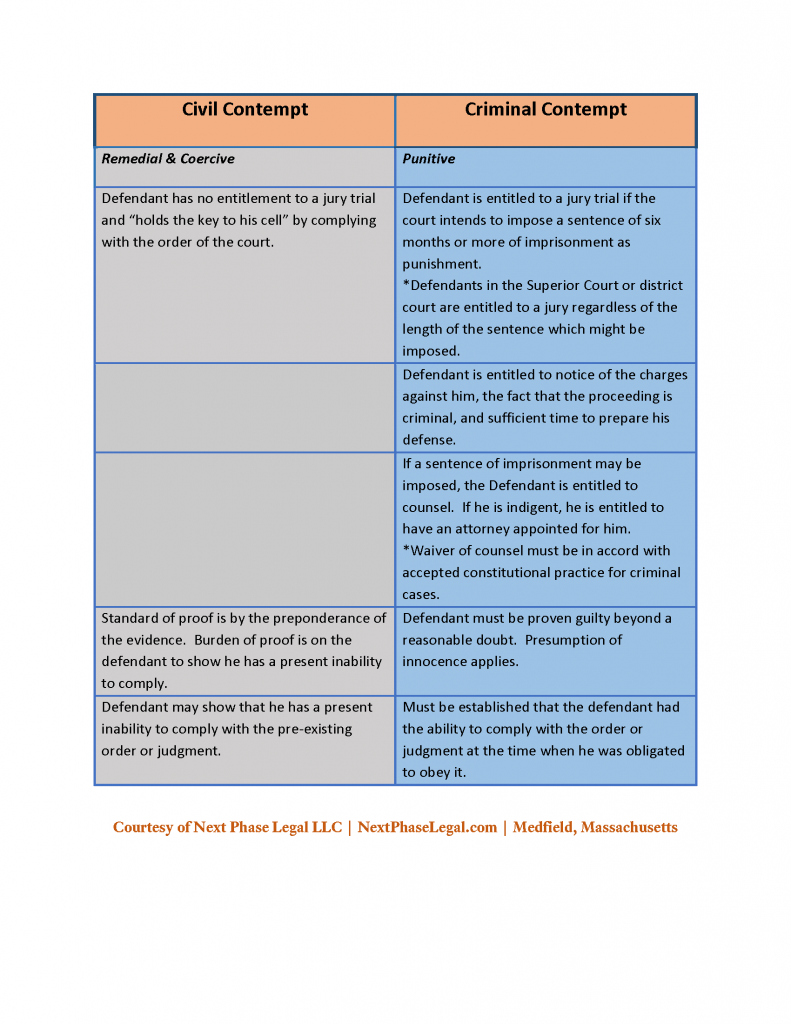